5 Things that May Make a Girl Act Desperate 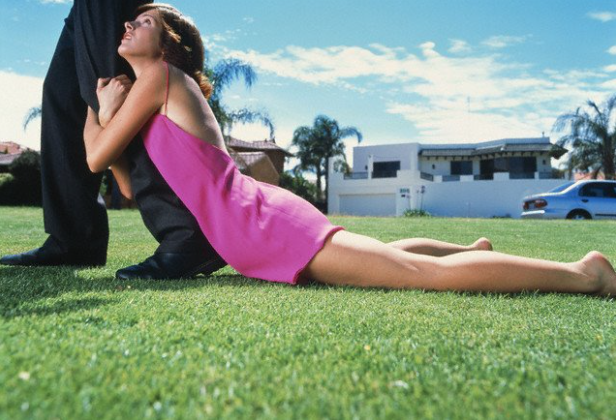 Have you been out and met one of those hot girls who you didn’t expect to fall for you but all of a sudden she’s all over you?

Or let’s say, she is a new employee at the work place and maybe on her recruitment, the boss told you to supervise her and within a few days she’s asking for dates or she signals willingness if a chance was given.

At times this may seem interesting that you now finally have people falling for you without doing much work or you can get confused – all that happens will mainly depend on your experience.

Babes at times can use ‘wanting’ you so as to have emotionless sex with you and with hidden agenda.

As grandparents normally say; when something looks too good to be true then it probably is. So you have to use both your gut and full conscience to judge whether the path you are taking is really worth it.

A desperate woman is a real issue. It goes against female programming. Below are five reasons why she’s acting desperate.

When the alarm begins ringing, there’s nothing she can do to stop it. It’s often too late.

While the Feminism philosophy may try so hard to empower the career woman, science will always show her that at a certain age; she won’t be able to have children.

This leads to women doing anything they can to become pregnant when the wall finally hits. This normally tends to explode when the realization registers that she is close to losing the gift of a healthy child.

That is normally anything after 27. Beyond this age – the zone is dangerous.

If your instincts tell you she is above that age, don’t accept any convincing statement from her.

If she tells you things like I am on birth control, I will abort – and you buy them, know you are in for it.

2. She isn’t the online profile

If a woman postures on Instagram as classy and unreachable, but she is throwing her number at you within even a few days of chatting with her, you need to think hard and long.

Women screen men, compare them against other lovers, and discuss them with their friends at cafes.

There are even television programs that are mainly focused on such things – think about ‘Girl Talk’ on NBS Television.

Remember, online you can be anyone, even if you’re an obese land whale.

So if you start seeing someone who looks like a clone of Zuena Nakirema on her profile clamouring for your attention … don’t be surprised when you meet a totally different figure.

When a girl starts acting desperate it’s because there is something about her that’s broken.

If you are acting laid-back and cold, and she is already signalling like she wants sex – it could be case of cloak and dagger.

Even if you don’t see anything, you aren’t safe.  Signs of venereal diseases are not that easy to detect with your eyes.

Condoms can protect you, but the risk still exceeds the reward. There are seven billion people on earth. You can find one that isn’t infected with a lifelong condition.

She wants you to become what she is. That way it cuts your options down from everything, to almost nothing. That almost nothing of course includes her.

This is when she comes to you essentially because of your personality and social value.

That is not entirely bad – it is in fact why men work hard to amass lots of material things – shiny red convertibles, huge and lavish penthouses etc.

And it’s those things that create your value as a man. With the man and a wealth of assets you are the knight in shiny green armour. Green – because of your bank account being able to fix her problems.

They are amazing at rationalizing their tastes for your money. She may hate downtown hustlers, but can deal with it if you have money.

This can be used as strength if you have work to do on yourself, or be led into spending your money for a woman that only wants an extra comma in her bank account.

My boyfriend moved away. Issues with an ex-boyfriend can put your life into serious danger.

Women love to be safe and secure. This is why a strong, muscular physique can increase your attraction substantially.

If she pushes for you to become official too quickly, it could be a sign she wants you to feel obligated for her protection, or her offense.

She may have an ex that’s dangerous to her and even more to you when photos of you begin to dominate her Facebook. Some women look at men as tools. You may be recruited to make another man jealous.

This is not a safe place for either of you to be. You do not want to find a woman who only wants you to fight her battles, more so those that throw you in dangerous positions.

If she’s acting desperate, you must protect yourself. In order to be safe you have to develop your self-control. You’re playing with a Venus fly trap. Keep your guard up, listen to your gut, and don’t ever betray the trust you have within yourself. It doesn’t hurt to ask other men for advice as well.

The Confusing Dilemma of Failure & Success, My Prison Of Misunderstanding. #BreakFree

What you need to know about HIV/AIDs today! #WorldAIDSDAY

22 Questions To Ask Before Saying “I Do”

Have You Tested Her Cooking? Business

Letter to Parents Before Exams Sent by a School Principal

Words From Father to a Son About #Marriage

7 Steps On How To Turn Your Life Around